I bought the Cheapest Automatic Watch on Amazon 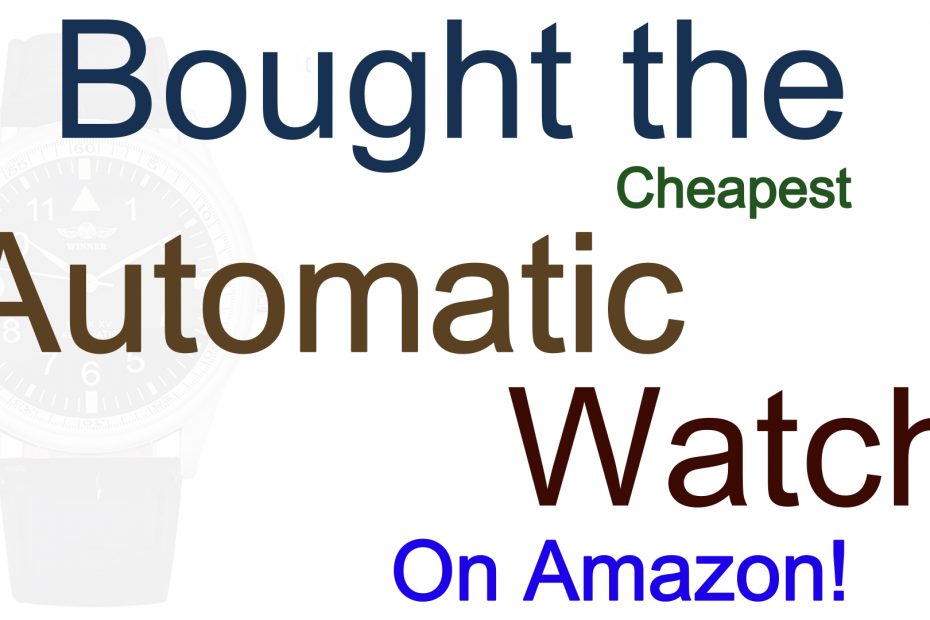 I have to laugh a bit when I write this, because this is not something that I normally do. I decided to purchase the cheapest automatic mechanical watch, a men’s watch, on Amazon, and see if it would be any good.

I have to admit, this is not something I recommend doing, but a lot of you like to see this type of review, and I sure hope that you find it entertaining, as well as somewhat educational.

My goal for this site and my Youtube channel is really meant to help educate you in watch repair, jewelry design, and cad work… However, even I like to watch “Cheap” reviews how and then….

Listen, I like to find the good in everything, and even with the least expensive, and not normally the best quality products, there is always something good to talk about.

The fact that the watch case has a display back, and that both crystals on the watch are mineral glass, is not only surprising, and rather unexpected, but is also a nice thing to have. Mineral glass will scratch, but tends to be tougher than the cheaper crystals commonly found on lesser watches.

I really like the dial on the watch. The black dial, with white accents is pleasing, at least to me, and I found it easy to read the time and pleasant to look at.

The case on the watch is made rather well. I have to admit that the case back is machined rather nicely and turns good, seals good too.

I also found that the watch came out of the box keeping good time also. When I initially tested the the timing it was running a few seconds slow, which isn’t too bad but I rather prefer a watch runs a couple of seconds fast rather than slow.

With any watch, there is going to be something that we won’t like about it, and this watch is no exception. I will say, I did expect more bad then good, and in this case, the bad really is only three items…

The first bad thing I found was the quality of the movement. It came rather scratched and had deep gouges in it. There is no micro adjustment to modify the timing. So, timing the watch is slightly difficult but doable.

The second bad thing that I saw was that the crown gasket is really small. It also fits poorly and will not offer you any water resistance. The listing even states that the watch should not be used in water or even the shower. With that said, I would say that if moisture gets into the case, the movement is going to rust based on the metal used to make the watch.

The last part of the bad parts is the band. The watch band is poor quality also. I decided to wear the watch for a few days, and one of the straps that holds the end of the band down broke within the first few hours of me wearing it.

With the good and bad out of the way, lets go over a couple things that may or may not matter to you.

First, the listing on Amazon, (click here to see it, and note it is an affiliate link), stated that the watch was made in Japan. Well, not true. It was made in China, and I’m not sure if that matters, but, it is a mis-statement.

Secondly, the case was listed as a 38mm case, but when I measured it, it is actually 41.5mm.

The band is listed as 20mm, but is actually 21mm. This might be an issue, after reading this, because you may want to order a new band, and the size of it is going to make a difference.

I really like the look of the watch. It is a good daily beater watch and it is an automatic movement, so you won’t have to set the time as long as you wear it daily. All of the functions work properly, and relatively smoothly also. The fact that the watch is keeping good time, means that you can trust it to run mostly accurate as you wear it, and enjoy the fact that you won’t be late for an appointment if you count on your watch for good time keeping.

If I were to invest in any improvements, I might say that I would change the band to something that would hold up a bit better, and I would also get myself a new crown that seals better on the case tube of the watch which I know would provide a bit more protection from moisture and debris.

This watch is aimed at those of you wanting a good, but not great automatic watch, and it meets that criteria. It ships quick, as I received my the day after I ordered it, and while the packaging is a bit weak, it arrived in great condition and of course, without damage.

Thanks for checking out my review, and have a wonderful day.